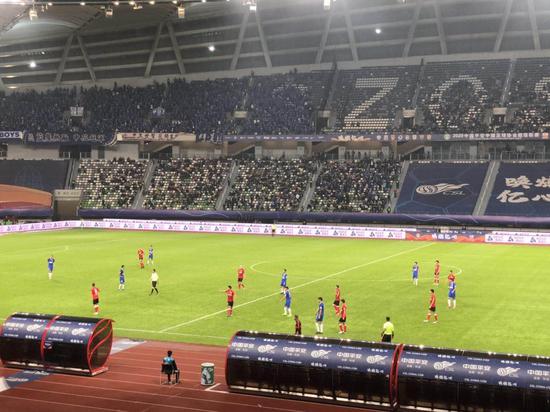 In the face of SIPG, which has a strong offensive power, Shenhua relies on tenacious defense and seals opponents. In the first round of the focus match between Shenhua and Shanghai SIPG in the second stage of the Chinese Super League, the two teams shook hands 0:0. The second round of the two sides will continue on October 23 at the Suzhou Olympic Sports Center.

This derby is the most disparity in value between the two teams in the past two years-Shenhua's 93 million yuan vs SIPG's 450 million yuan. Shenhua, who is not as capable as SIPG, has taken a strict guard posture. Head coach Cui Kangxi has only sent two foreign aids, Mbia and Moreno, in the starting lineup, and two newly joined Ecuadorian foreign aids, Bolaños and Martin. Nath sat on the bench on standby. Cui Kangxi used two veterans Mbia and Feng Xiaoting for the very crucial central defender position. In the first stage of the league, Bi Jinhao, who was changed to striker with good effect, still topped the striker line.

After the opening, SIPG took possession of the scene, and Shenhua was unable to pass halftime at one time, but he did not get a good chance. In the 36th minute, Shenhua quickly took a free kick and went directly to Bi Jinhao. Bi Jinhao cut into the penalty area. When Yan Junling rushed out of the interception, he had physical contact with Bi Jinhao, and Yan Junling fell to the ground. After seven or eight minutes of treatment, the team doctor made a substitution and adjustment gesture to the bench. Yan Junling's left eye was obviously swollen and could not continue the game. Substitute goalkeeper Chen Wei replaced Yan Junling. This substitution adjustment is not a small loss to SIPG. As a national gate, Yan Junling, as the last line of defense of SIPG, has repeatedly performed well. At the end of the game, Yan Junling was very upset and kicked the goal post with his foot. After the game, SIPG coach Pereira talked about Yan Junling and believed that his injury should not affect the second round of the game between the two sides.

Shenhua continued the very tough defense in the first stage of the league, especially Mbia on the back line, who repeatedly appeared in critical positions at critical moments. After the game, Mbia was named the best player on the spot. There is also Zeng Cheng, who is still the most stable part of Shenhua's defense line. Speaking of defense after the game, Shenhua’s head coach Cui Kangxi said, “We conceded a lot of goals in the league last year, reducing the number of goals conceded in the league. Not only the backcourt players, but all the players on the court have to steal the defense, and what I want to say is we The defense did a very good job. I really want to praise the players on the defense. In the first round a draw, sum up the opponents who did well and those who did not do well, and play the next game.” In the end, the two teams scored 0 in this game. :0 Draw, the two sides will decide who can advance to the top 4 of the Super League this season through the second round of the game.

Although the second stage of the league uses a two-round knockout format, it is still different from the previous knockout format of the FA Cup. In the two rounds of matches, the two teams first compare the win-loss relationship, and then compare the number of goals scored under the same circumstances. If there are still no equals, overtime or even penalty shootouts will be played.